The Fall of Mosul: How ISIS Managed to Take the City 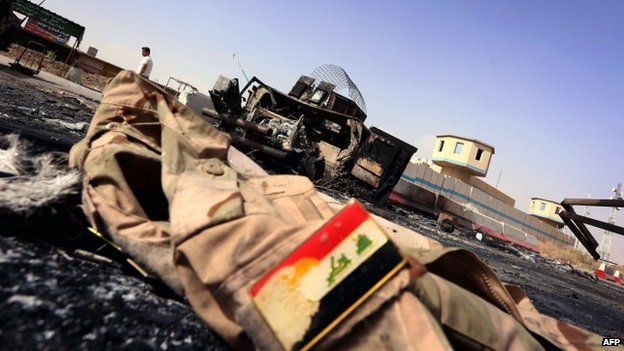 “When the jihadists advanced towards Mosul on 6th June 2014 their aim was just to take a neighborhood for a couple of hours. They did not expected that all the government apparatus in the city would collapsed like a house of cards“.

(by Nino Orto) Lieutenant General Mahdi Gharawi, responsible for Mosul’s security, knew the attack was imminent. At the end of May 2014 the Iraqi security forces had arrested seven Islamic State’s fighters in Mosul and discovered that the group was organizing an offensive on the city.

On June 6th 2014, 2:30 am, Gharawi and his entourage were coming back to their headquarters after an inspection of military outposts within the city. Outside of Mosul, meanwhile, hundreds of pickups were advancing from the West through the desert across the border with Syria. Each vehicle was occupied by four jihadists heavily armed.

From 3:30 am, the militants were already fighting inside Mosul, triggering a two-day offensive that will cause the collapse of four Iraqi divisions and the capture or death of thousands of soldiers. Within three days, the Iraqi army would have abandoned the second country’s largest city to its attackers. A loss that triggered a series of events that continue to reshape Iraq up to now. The event has also contributed to the dismissal of Maliki and pushed Western powers and Arab Gulf nations to launch air strikes on Islamic militants in Iraq and Syria.

However, as Mosul was lost and who gave the order to leave the city is unclear up to now. There is no official version: only stories of soldiers who deserted “en masse” and some infantry platoons that have contested the order to withdraw.

Who was to blame?

In June 2014, Maliki initially accused the regional powers and the rival leaders for was happened in Mosul. At the end, the Iraqi government blamed Staff Lieutenant General Mahdi Al Gharawi, stating that no order to withdraw troops were issued from Baghdad. In September 2014, he was dismissed and put under a militar trial.

A Reuters investigation, however, shows that both senior military officials and Maliki share at least the blame. Many in Iraq agrees as the shortage of troops and the infighting among Iraqi political leaders have favored the Islamic State.

The Gharawi’s role in the debacle is a matter of debate. According to the Provincial governor and many citizens is the Iraqi government that alienated Sunni majority in Mosul and helped to create jihadist’s dormant cells inside the city. Gharawi says he did not give the final order to leave the city. Others involved in the battle endorse this statement and says that Gharawi has resisted until the city has been invaded. It was only then that he fled.

Gharawi says that three people have given the final order: Aboud Qanbar, then Deputy Head of Staff of the Ministry of Defense; Ali Ghaidan, then commander of the ground forces; and Maliki himself, who personally directed his senior officers from Baghdad. The secret of whom decided to leave Mosul, Gharawi says, is liying among these three men. Gharawi also says that the decision by Ghaidan and Qanbar to leave the west part of Mosul triggered mass desertions when soldiers realized their commanders had fled.

Neither of the three men has publicly commented on their decisions about Mosul. Maliki refused any requests for an interview on this subject. Qanbar did not answer, while Ghaidan could not be reached. Lieutenant General Qassim Atta, a military spokesman with close ties to Maliki, told Reuters that Gharawi “above all others has failed in his role as commander”. The rest, he said, “will be revealed by the judiciary.”

In many ways, the story of Mahdi Al Gharawii is a window into Iraq. The General, belonging to the Shiite community, has been a key figure since 2003 when the Shiites began to gain power after the United States dismissed Saddam Hussein and his Sunni Baath party.

Shia leaders greeted Gharawi as a hero, while Sunnis see him as a killer who used the war in Iraq as a cover to extort money from innocent people. Mahdi al Gharawi has increased his power through an Army divided by sectarian divisions, corruption, and political affiliations. And it is now trapped by those same forces.

The decision to punish him and ignore the role of a senior figure shows not only that the reconstruction of the Iraqi Army will be difficult, but also that the country is always at risks of rupture. As demonstrated in Mosul, the Iraqi army is a failed institution in the heart of a failed state.

According to Gharawi, he becomes a scapegoat and a victim of deal-making and alliances that keep Iraq’s political and military elite. Ghaidan and Qanbar, Maliki’s long-standing confidants, were only sent home.

Gharawi, who lives in his hometown of southern Iraq, says his masters put the blame for a rotten system on him. “They just want to save themselves from these accusations,” he told Reuters during an interview in Baghdad. “The investigation should include the highest commanders and the leadership. Everyone should say what they know”.

When the jihadists advanced towards Mosul on 6th June 2014 their aim was just to take a neighborhood for a couple of hours. They did not expected that all the government apparatus in the city would collapsed like a house of cards. Some hundreds of them settled that night becoming in the following days over 2,000 fighters, welcomed by the angry Sunni citizens of the city.

The first line of defense of Mosul was the Sixth Brigade of the Third Division of the Iraqi Army. Officially, the brigade had 2,500 men but according to an internal investigation, they were only 500 soldiers on active duty.The brigade was also short of weapons and ammunition. Infantry, armor, tanks had been moved to Anbar, where more than 6,000 soldiers were already been killed and another 12,000 had deserted.

In the district of Musherfa, one of city’s most important military base, there were only 40 soldiers serving on the night of June 6th. According to Gharawi’s, he ordered his forces to form a defensive line to isolate the West’s neighborhoods of Mosul besieged by the Tigris River. Gharawi also said he had received a call from Maliki to hold positions until the arrival of Qanbar, the deputy head of the defense ministry cabinet, and Ghaidan, who commanded the Iraqi ground forces. Qambar is a member of the tribe of Maliki, while Ghaidan had long assisted Maliki in security operations.

Now the fate of the city depended on Gharawi.In the afternoon June 8th, the Islamic State converged towards the city. More than 100 vehicles, with at least 400 men from Syria headed towards Mosul in addition to the fighters already in the city. Sleeping cells hiding amongst the population had been activated and gathered around. The insurgents bombed a police station in the al-Uraybi neighborhood and around the Mosul Hotel. Gharawi and his federal police fought back hammering with artilleries the areas controlled by the Islamic State. In few hours, however, Gharawi’s command moved into chaos.

Military sources report how Ghaidan and Qanbar deposed a division commander who had refused to send his soldiers to defend the Mosul hotel. General Zebari considers the order another serious mistake: “During a battle, it is not possible to replace the commander.” By June 9th, the fourth battalion of Colonel Obeidi and forty of his men were engaged in the last fight to restrain the jihadists in the western Mosul. The rest had escaped or joined the jihadists.

Ahmed al-Zarkani, the head of the intelligence office in Mosul had repeatedly warned the Iraqi government in Baghdad that Abu Bakr al-Baghdadi’s group was planning something. Since February 2014 he forwarded a request to the central authority for targeted bombings against militant training camps outside the city. Appeals that have been repeatedly ignored, as well as those of other key political personalities.

At the beginning of 2014, the “rais” Nouri al Maliki was the Prime minister of Iraq and responsible for two key departments as the Ministry of Defense and Internal Affairs, this last responsible for the management of intelligence. The recent parliamentary committee, therefore, said that most of the responsibilities for the fall of Mosul must be charged to Maliki and for a lesser extent to the governor of Mosul, Athil al-Nujaifi, who has since then been sacked.

But why have the precious information sent to Baghdad been ignored instead of being used to prevent a probable attack?

According to Nujaifi, the Commission accused him because he had not informed the Prime Minister that the city would fall shortly thereafter. “But at the same time, Maliki’s chief of staff stated in his testimony that I was the only one to call to explain the situation by asking more weapons. Maliki simply replied that it was not the governor’s job” Mr. Nujaifi says.

Nujaifi, from the Sunni political spectrum, indicates in the confessional tensions between Shiites and Sunni Iraqis the cause of the almost total absence of communication between his office and Baghdad. According to the former governor of Mosul, Maliki himself would have ordered his subordinates not to share information with him.

The reason for Nujaifi was clear: Maliki’s reluctance to help the Sunni politicians potentially close to the Baath party: “Maliki thought I had ties with the Baath party and that, if he had given his support, the Saddam’s political party would once again have a strong presence in the city “.

The former governor believes that Maliki and his followers were so frightened that the Baath could take again over the population: “they knew that if there had been a Sunni political power in Mosul no one would help them. With Islamic State, the whole international community supported them. For Maliki, any acceptable Sunni power for the international community was more dangerous than ISIS”

By Osservatorio|2018-01-05T15:16:25+00:00January 2nd, 2018|Categories: analysis|Tags: Iraq, ISIS, Jihadism, Mahdi al-Gharawi, Mosul, Mosul's fall, Nino Orto, Nouri al-Maliki, Osservatorio Mashrek|
We use cookies to ensure that we give you the best experience on our website. If you continue to use this site we will assume that you are happy with it.I Accept
Go to Top