“The problem is not in liberation of Mosul, it is what happens after ISIS. This is a very important point. There should be an agreement between all parties before the battle starts, under the supervision of US, coalition and the UN in order to prevent tension and problems“ 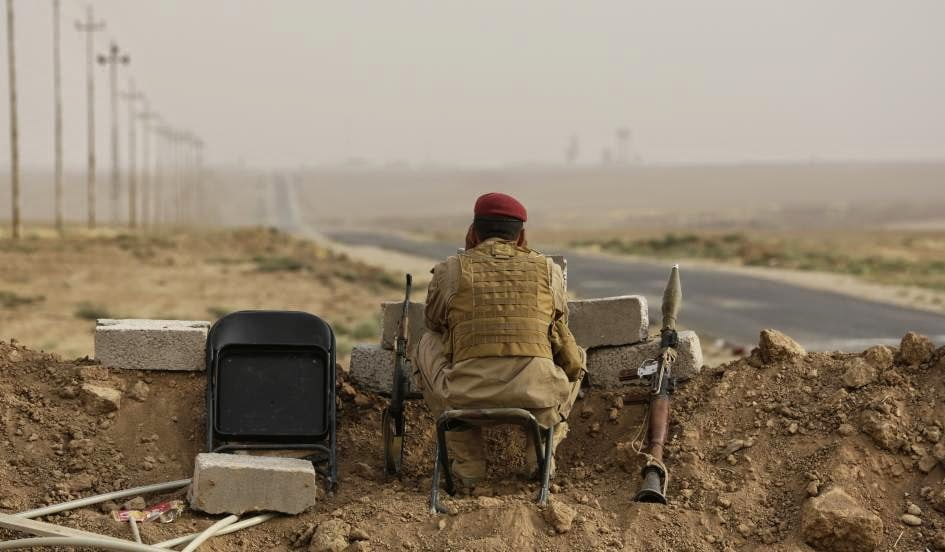 (by Osservatorio Mashrek) The battle for Mosul will be different from all other battles that have taken place in Iraq,says Khasraw Goran,a member of the Kurdistan Democratic Party (KDP) leadership council.He rejects the claim of Iraq’s Shiites and Sunnis that they can liberate the city without coalition support. “No place can be liberated without global coalition air support.” Goran told in an interview.

Goran who is head of the KDP parliamentary bloc in Baghdad and served as head of the KDP office in Mosul for eight years, believes that there should be a clear agreement on the role of each force before the battle to expel ISIS kicks off. He warns in the meantime that the rights of all non-Sunni Arab minority groups should be guaranteed, possibly in the form of establishing two new provinces for the Yezidis and Christians east and west of Mosul.

Most Iraqi officials, especially Shiite militia leaders say that they do not need the participation of any foreign troops in the Mosul battle, and that the can liberate the city by themselves. How accurate is this assessment?

So you think foreign combat forces should take part in the battle? And how crucial is their presence to prevent civil or sectarian war in Mosul?

So far the global coalition does not have combat forces anywhere, except the trainers, advisors and logistical support. But I do not think it is necessary for those forces to take part in the battle, because there are the Peshmerga and Iraqi forces on the ground, though if they come to make a peace deal between the parties in Mosul this is something else.

The problem is not in liberation of Mosul, it is what happens after ISIS. This is a very important point. There should be an agreement between all parties before the battle starts, under the supervision of US, coalition and the UN in order to prevent tension and problems. There is the possibility that after liberation there will be problems, as there is now in Shingal or similar to what happened in Tuz Khurmatu. When there are three or four different groups and they in dispute, for sure this will cause problems. I am not sure if foreign combat forces will be part of the operation or not, but according to some information, their numbers are increasing day by day.

Almost all Sunnis have expressed concern and reject the participation of the Shiite militia—Hashd Al-Shaabi—in the Mosul battle. Where do the Kurds stand on this?

The Peshmerga, Iraqi army and the Hashd forces are all in one front against ISIS. We should all become an alliance. The Hashd should not be in a place that is not necessary. But there were many places that was necessary for the Hashd to take part. Regarding the Kurdish areas of Mosul we do not need Hashd presence for we have the Peshmerga, and the local people of liberated Kurdish areas are now in charge of their own security. Only about 10-15 percent of Kurdish areas around Mosul are left to be liberated. For the other areas in Mosul it is up to the Iraqi army and the Hashd where they want to be deployed.

The Mosul issue is political as there are a few factions that want the Hashd to take part in the Mosul battle and its clear who they are: the Shiites of Mosul whose number is not more than 7-8 percent and they are in Talafar as well as the Shiite Turkmen and Shabaks east of Mosul. For us is not a problem whether or not the Hashd takes part in Talafar, and for the Kurdish areas we do not need any forces be they the Iraqi army, Hashd al-Shaabi, or the Sunni Hashd al-Watani. But we consider The Hashd our ally and we are both in the same front against ISIS.

Is there any military plan on dividing the role of each force, and will the Peshmerga enter Mosul city?

Absolutely, there will be military agreements before the battle. There will be planning that will assign the role of each force and brigade, like who will go from Makhmour, Qayyara, and other areas towards the center of Mosul. All will be discussed and planned ahead. No one will go to war without a plan. The Peshmerga will return to the areas where they were based before the rise of ISIS. Kurds historically have not occupied anyone’s land, always defended their own land. The Peshmerga forces are now only in liberated Kurdish areas. Only a few areas are left to be liberated.

Do you think post-ISIS it will be easier for the Kurds to negotiate with Baghdad and Sunnis in Mosul or will be the same as pre-ISIS?

We will have more clear and transparent talks with Baghdad after the liberation of Mosul. The Kurds sacrificed a lot, and ISIS brought tragedies for us like the Shingal massacre and for the liberation of those areas hundreds of Peshmerga were killed. So, as President Masoud Barzani said, the only reward of this sacrifice is Kurdish self-rule, and other Iraqi factions should realize that the Kurds deserve to have their own rule.

After ISIS, the Kurdistan Region borders should be marked and we have to reach an agreement with Baghdad. Whether it will be the implementation of Article 140, a referendum or a political agreement, all the options are available.

What will be the Kurdish position in future administration of Mosul? How easy will it be to annex the Kurdish areas around Mosul to the Kurdistan Region after ISIS?

The Sunnis suggest that they form their own security force in Mosul. Who do you think should be in charge of Mosul security post ISIS?

This is another problem. Mosul is an important region of Sunni Arabs in Iraq, people of Mosul and Sunnis in general have problems with Baghdad, and they want to have their own region and security forces. It is not clear whether the Sunnis of Mosul will reach an agreement with Baghdad on this before the battle or after.

How much the Sunni tension with Baghdad will impact the Kurdish negotiations with Baghdad? Should the Kurds first make a deal with Sunnis in Mosul and then with Baghdad since the city dominated by them?

Yes, this is another possibility. Now we are three groups in Baghdad: Kurds, Sunnis, and Shiites. On many issues we agree with the Sunnis against Baghdad, but also we have common issues with the Shiites in Baghdad. Regarding to the future of Mosul and Sunni areas in general, we are sympathetic to them to have their own region, rule their own people, this is a constitutional right given to Iraqi provinces.

If we have a Sunni region next door, do you think it will be easier to annex the disputed areas of Mosul to the Kurdistan Region?

No, it is not easy with anyone. Rights will be achieved no given. When I was in Mosul from 2003-2011 our main issue was with the Sunnis, because our land problem is with the Sunnis not the Shiites. About %90 of our borders are with the Sunnis, therefore we have to make agreement with them as well. The three main groups (Kurds, Shiites, and Sunnis) in Baghdad should make an agreement on the future of disputed areas. The land issue is not only between the Kurds and Sunnis in Iraq, but also between Shiites and Sunnis as well, in areas around Baghdad, Babil, Diyala, Salahaddin provinces, and many areas that were under control of ISIS and after they were retaken they did not let people return to their homes.

Some Sunnis want the presence of coalition troops in Mosul to protect them from Shiite revenge. What’s your view on this?

Mosul is an important province in Iraq. It’s land size is about 37-38 thousands square kilometers, and its population is more than 3 million people, therefore Mosul is important for many actors: the Americans, the Kurds, Sunnis, Iraqi government as well as Iran and Turkey, and there are important minorities like Yezidis and Christians and they have been oppressed a lot in Mosul. The US and EU are carefully watching the Mosul battle and they will do so after liberation. There are Turkish forces in the Mosul area, and Iran is also watching the battle with interest, therefore this battle will be very different from other battles that have taken place in Iraq.

What do you think of proposals to establish provinces and independent regions for minorities like Yezidis and Christians in Nineveh?

The Iraqi constitution guarantees the rights of all different minorities and religions and this constitution should not be just ink on paper.  It should be implemented, and we respect all the religions. Yezidis are our brothers, are Kurdish but they have a different religion that should be respected, and the Christians are our fellow citizens from this country and their religion should be respected, their rights guaranteed.  We are for turning west of Mosul into a province with Shingal as its center, and establish another province in east of Mosul for the minorities who live there such as Christians, Kakais, Shabaks ,and Yezidis.

How will the Sunnis react to such proposals as their own priority is to turn Mosul into a Sunni independent region?

Mosul does not belong to the Sunni Arabs alone. About 45 percent are non-Sunni Arabs. So 50 percent should not take away the right of the other 50. It is not possible to turn it into a Sunni region alone and the borders are clear. Makhmur, Shingal, Shekhan, Telkef, Qaraqosh ,Bartla, Bashiqa, and Zummar are not part of the Arab land. The reality, historical and geographical facts talk. It’s the Sunnis’ right to turn all their land in Iraq into an independent region, and their territories are clear to all. No one can claim that Anbar belongs to the Kurds.

(by Osservatorio Mashrek)The battle for Mosul will be different from all other battles that have taken place in Iraq, says Khasraw Goran, a member of the Kurdistan Democratic Party (KDP) leadership council. He rejects the claim of Iraq’s Shiites and Sunnis that they can liberate the city without coalition support.
By Osservatorio|2017-03-12T22:05:09+00:00August 11th, 2016|Categories: latest, news|Tags: Abu Bakr al-Baghdadi, Baghdad, International Coalition against ISIS, Iraq, ISIS, Mosul Battle, Osservatorio Mashrek, Peshmerga, Shiite militia|